GRAND RAPIDS, MI -- The 2018-19 hockey season has officially come to an end with the conclusion of the USA Hockey National Championships, which took place April 3rd through 8th in Michigan. This year's championships at the U18, U16, and U15 levels were filled with both current and future members of the BEAST Tournament Series. In just two seasons, the BEAST league continues to set the standard. Now when you tack on the performances of the league members at Nationals, the BEAST league is riding high on their way out of the 2018-19 campaign and into the 2019-20 season.

"The league is growing, and it's continuing to do so in the right direction," said Jon Bellonio and Steve Novodor, the directors of the Yale Bulldogs. "It's just a very competitive and challenging league, and it came as no surprise to us or any of the other members, when we had so many teams advance to Nationals this season. The BEAST league is made up of the top players and teams in the country, plain and simple."

Speaking of those top players and teams, the BEAST league saw two of its teams face-off in the U18 National Championship Game, as the Selects Academy knocked off the North Jersey Avalanche in a 3-2 overtime thriller. After winning the BEAST title back in the October, the Selects rode that momentum throughout the year on their way to second consecutive National Championship.

"Obviously the BEAST is an elite league as further evidenced by the showings the member clubs had at the National Tournament," said Selects U18 head coach Chris Uber. "I think the championship in October played a big role in forming this group's identity and belief that they were winners and capable of winning on the biggest stage. There were ups and downs throughout the year, but that winning culture and mentality never really left and these kids consistently played their best hockey when it mattered most starting back in October."

As Uber mentioned, his team rode some ups and downs throughout the year, but ultimately capped things off with another title at the U18 level. While of course the title benefits his organization first and foremost, Uber also knows that as his program continues to get stronger, so will the rest of the BEAST teams that are now trying even harder to knock them off.

"I think the back-to-back titles and doing so at the U18 level says a lot about our commitment to a culture and player development here at South Kent," added Uber. "These championships are in some cases 3-4 years in the making. We have been fortunate to have great athletes and quality kids, but winning doesn’t come easy and the fact that these groups worked for it year after year to earn the chance to go out on top speaks volumes about their character and the growth and benefits that come with being a part of this program. It will only get harder for our future teams."

While Uber and the Selects were the only 2018-19 BEAST member to claim a National Championship, a future member of the league also left Michigan with a title. The Pittsburgh Pens Elite program will join the BEAST league this upcoming fall, fresh off winning it all at the U16 level earlier this month.

With programs like the Pens set to join the BEAST, along with a number of other top-notch midget organizations, the tournament series is going to only get more difficult in the years to come. They say that in order to be the best you have to beat the best, and the BEAST league is out in front of everyone else.

"Being able to be a part of USA Hockey Nationals at 2 levels [15s and 18s] was directly due to the great competition we faced all season long in the BEAST," said Randy McDougall of the Neponset Valley River Rats. "Both River Rat teams were granted an at-large bid into Nationals and it’s a testament to the great schedule we play during the entire fall. It is nice to see so many familiar faces around the rink at Nationals with 9 BEAST teams competing for the National Championship. In only 2 years, the Beast has become a league that has teams winning or in the finals across the different Tier 1 ages that sponsor a National Title game, and it’s very exciting to be a part of that. The River Rats look forward to getting back to work in 2019-2020 and hopefully being back in Michigan in April of 2020, competing once again for an opportunity to win our program's 2nd USA Hockey Tier 1 National Championship."

A 'USA Hockey Tier 1 National Championship', that's the goal for the River Rats and every other member of the BEAST league, as the hockey calendar begins to turn over to a new year. The first step in reaching that goal comes this fall, when the BEAST Tournament Series resumes play for its third season.

As the preparation now begins for both the new and old members of the BEAST, the spotlight is starting to shine even brighter. From Division 1 commitments, to the exposure the league provides to its players, nothing comes close to what the BEAST has to offer.

Bellonio and Novodor said it best, in one final statement from the 2018-19 season ...

"We NEVER have an easy game in the BEAST league. Every game is a battle." 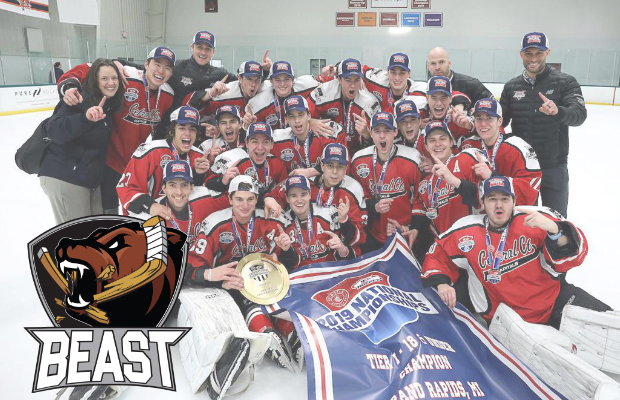